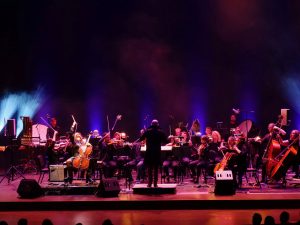 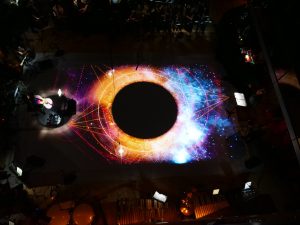 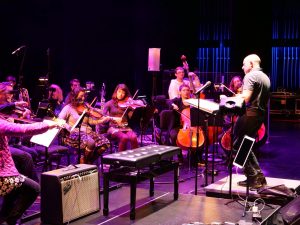 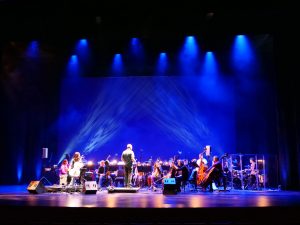 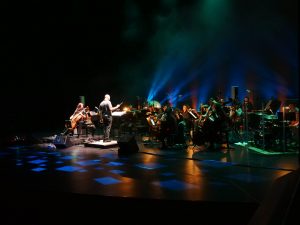 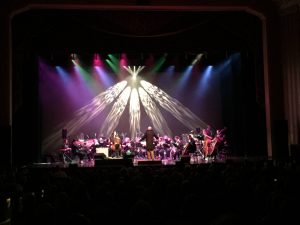 Evan Ziporyn founded AMBIENT ORCHESTRA in January 2016 as a People’s Orchestra for the 21st Century. Our repertoire is the ‘hidden-in-plain-sight’ recorded masterworks of ambient music, electronica, progressive rock, fusion jazz, and world music. We seek to transform this treasure trove of beloved recorded repertoire into large-ensemble, live human performance, to help audiences connect to the intensity – and necessity – of the orchestral idiom.

The Ambient Orchestra is the brainchild of Artistic Director Evan Ziporyn, who arranges for and conducts the ensemble. Ziporyn, having done award-winning arrangements for Bang on a Can (Brian Eno’s Music for Airports), YoYo Ma’s Silkroad Ensemble (the Grammy-award winning Sing Me Home and the soundtrack for Ken Burns/Lynn Novick’s documentary The Vietnam War), and Maya Beiser (Uncovered), launched the orchestra in the wake of David Bowie’s untimely death in January 2016. Said Ziporyn, “We wanted to do something right away, in the moment, while everyone’s thoughts and feelings about David Bowie and what he represents were still highly present. It was a both a way to express our collective grief and, in the spirit of Bowie’s endless creativity, channel it into something positive and beautiful.”

That debut performance, a benefit for cancer research held just two weeks after Bowie’s death, featured an 80-piece volunteer ensemble of the Boston-area’s top professional musicians, in a performance of Philip Glass‘ two Bowie-inspired Symphonies, Low and Heroes. One year later, in March 2017, the group re-assembled to premiere Ziporyn’s startling, evening-length arrangement of Bowie’s final album Blackstar, reconceived as a concerto for cello vistonary Maya Beiser. Beiser and Ziporyn have since performed the Blackstar Concerto with the Barcelona Symphony and at New York’s Central Park SummerStage. In Fall 2018 The Ambient Orchestra with Beiser as soloist embarked on their first US tour, which will conclude with an already-sold-out upcoming performance at Boston’s Isabella Stewart Gardner Museum, featuring an immersive multimedia environment developed especially for the piece by the creators of Guitar Heroand Rock Band, Eran Egozy and Alex Rigopulos.

Critical reaction has been effusive. Of the Boston premiere, the Boston Globe’s Marc Hirsh wrote, “David Bowie’s “Blackstar” was from the very start an album fundamentally concerned with transformation. Friday’s sold-out recasting of Bowie’s swan song as an extended orchestral piece by cellist Maya Beiser & The Ambient Orchestra, conducted by Evan Ziporyn, was in its way more faithful to his intentions than a straightforward duplication of the record…The orchestra’s approach took advantage of the rich, jazz-infused harmonic palette of “Blackstar.” As the rest of the strings rose up in deep menace and then flitted away like shadows, Beiser’s cello replaced the vocals of “Sue (Or In A Season Of Crime)” with a shivering panic, and “Girl Loves Me” tick-tick-ticked along implacably while she captured the curvy fillips of Bowie’s singing. And as it pressed forward, “Lazarus” reached further down into the grave and further up toward the stars all at once.” WBUR’s Jeremy Goodwin opined, “Ziporyn’s arrangement draws out the epic sweep, translating Bowie’s introspection into letters big enough for sky-writing. It turns out the combination of cutting edge classical music and the work of an arty rock hero can sound pretty sweet!”

Following the Barcelona performance, in a review entitled “The Fantastic Symphony of David Bowie,” El Mundo’s Javier Blanquez wrote, “Bowie is already symphonic. But last night another color was added to his music, a rich and adventurous density that easily and forcefully connected high and popular culture.”

Upcoming projects for the group include new versions of music by Robert Fripp & Brian Eno, Erik Satie, Laraaji, Glenn Branca, and Ziporyn himself. In March 2019 the group travels to Australia for 3 performances at Adelaide Fringe, in collaboration with the Elder Conservatorium. The group takes its name and inspiration from Brian Eno, who defined ambient music as ‘an atmosphere, a surrounding influence, a tint…pieces for particular times and situations.’ Ambient also means ‘of or relating to the immediate surroundings.’ The Ambient Orchestra is devoted to both.

For more info on this artist, visit: